Big announcement today! In Concert in March in Wichita:

Tickets can be purchased online at www.selectaseat.com, by phone at 855-755-SEAT (7328) or in person at the Select-A-Seat Box Office at INTRUST Bank Arena. 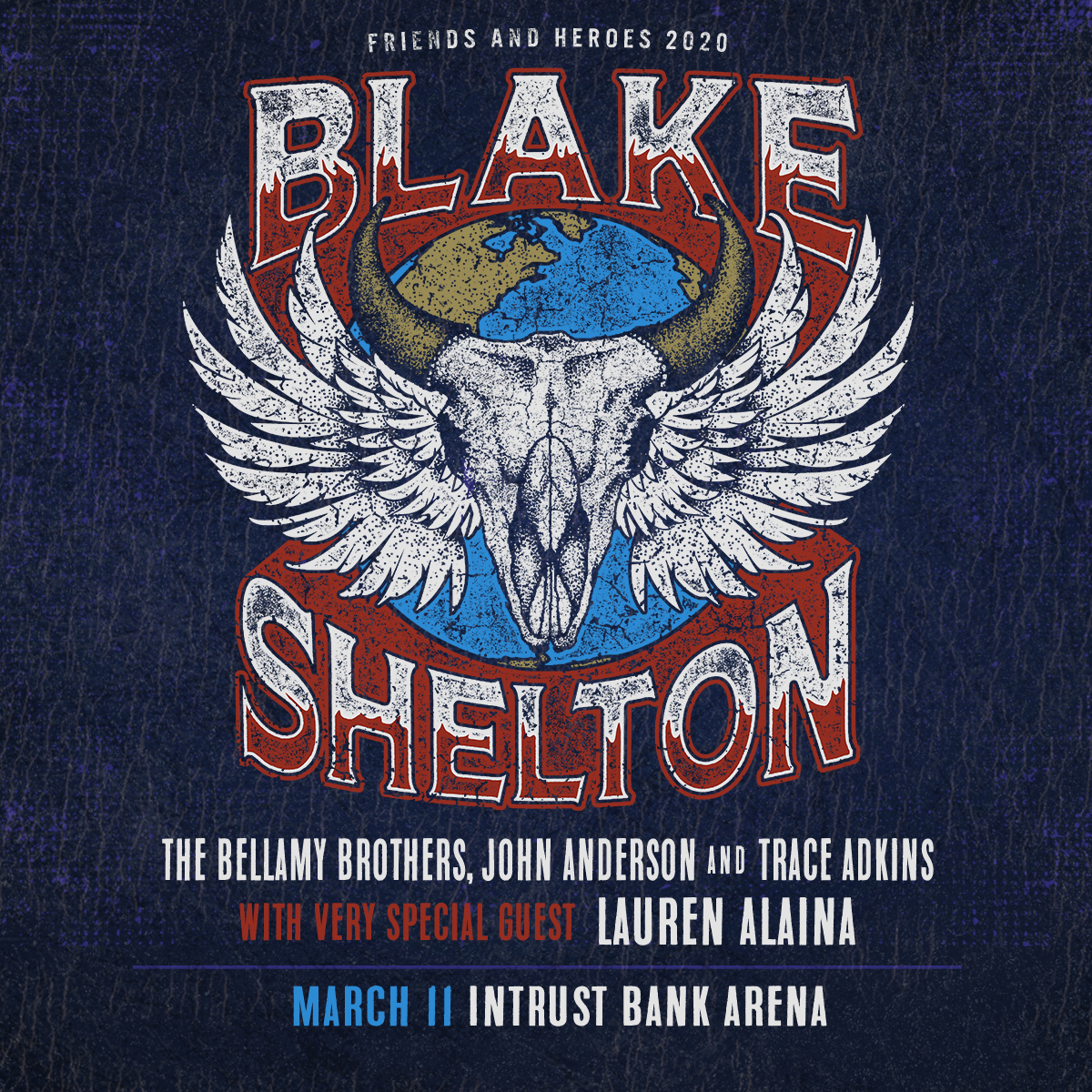 Wichita, Kansas – Country music superstar Blake Shelton championed his friends and heroes this year more than ever, from sharing singles to sharing stages – and he’s not done yet! The arena-selling, multi-media entertainer will hit the road once again for “Friends and Heroes 2020” beginning Thursday, February 13 in Portland, OR. The 16-date run will hit major cities throughout the Midwest and West Coast, including a stop at The Forum in Los Angeles (full list below). Joining him is very special guest Lauren Alaina as well as appearances by The Bellamy Brothers, John Anderson and Trace Adkins.

“The Friends and Heroes Tour was so exciting and successful last year that I couldn’t imagine not trying something like that again,” said Shelton. “Even though every night when the show wrapped, I would tell the audience that they might never see something like this again, with these legends, my plan all along was to at least try to make that happen. I didn’t know if I’d be able to get the same artists, but we were able to work it out where we have the Bellamy Brothers, John Anderson, Trace Adkins and Lauren Alaina all coming back to do the exact same tour. We were only able to do a handful of shows last year, so we’re going to take the tour to different areas so that fans will get a chance to see what we did. I feel like it was the best concert experience that I’ve ever been involved in, and I’m ready to get fired up again.”

Tickets will go on sale Friday, November 1 at 10:00 a.m. and can be purchased online at www.selectaseat.com, by phone at 855-755-SEAT (7328) or in person at the Select-A-Seat Box Office at INTRUST Bank Arena. Visit https://www.blakeshelton.com/ for links to buy. A limited number of exclusive VIP Packages will be available. These exclusive offers can include an amazing selection of tickets, backstage tours, access to VIP hospitality lounge, preferred parking, custom merchandise and much more.

In addition to announcing the tour, Shelton is reminding the world that “Jesus Got a Tight Grip” in his brand new song (listen HERE). The seasoned songwriter penned the track alongside frequent collaborators Chase McGill, Jessi Alexander and Rhett Akins. The upbeat tune celebrates the goodness in everyone, even those who might “have a little rust on [their] halo[s].” “Jesus” is available today and comes accompanied with a live video that features his touring band, including CMA Musician of the Year nominee Jenee Fleenor (watch HERE).

The project’s title track, three-time CMA-nominated smash “God’s Country,” is the fastest country single in the past year to reach one million track equivalents. It is nominated for Video, Single and Song of the Year. The smash hit became Shelton’s 26th No. 1 on country radio, where it remained for a multi-week run, in addition to his 16th No. 1 on the Billboard Hot Country Songs chart. Shelton also earned a Musical Event of the Year nomination for “Dive Bar,” his collaboration with music icon Garth Brooks.

Between putting the finishing touches on Fully Loaded: God’s Country, Shelton has a few select tour dates and is currently filming for the next season of The Voice. Live shows begin November 11.

ABOUT BLAKE SHELTON
Country Music Association’s 2012 “Entertainer of the Year,” five-time Male Vocalist of the Year winner and GRAMMY nominee Blake Shelton continues to add to his superstar status. He recently debuted his new single “Hell Right” featuring Trace Adkins and penned by David Garcia, Brett Tyler and Michael Hardy. The three-time CMA nominated smash “God’s Country” became his 26th No. 1 on country radio, were it remained for a multi-week run, in addition to marking his 16th No. 1 on the Billboard Hot Country Songs chart and the fastest country single in the past year to reach one million track equivalents. On December 13 he will release both songs as well as new music and previous hits on his album Fully Loaded: God’s Country. Shelton has also teamed up with the legendary Garth Brooks for rapidly climbing single “Dive Bar,” which earned the highest chart debut in seven years.

A member of the Grand Ole Opry, the Platinum-selling entertainer has earned a host of honors throughout his career including 20 ACM nominations and both the male and overall Video of the Year trophies at the 2018 CMT Awards. As a coach for the Emmy Award-winning television show The Voice, Shelton is a six-time champion, most recently with his contestant Chloe Kohanski. The Grand Ole Opry member also remains focused on his Ole Red partnership with Ryman Hospitality. The newest addition to the collection of restaurant and entertainment venues will open in Orlando next year and joins locations in Tishomingo, Nashville and Gatlinburg.

Lauren’s critically-acclaimed sophomore album, Road Less Traveled, landed on multiple “Best Of” lists including Billboard, Rolling Stone and Amazon, and it became the top-streamed female country album release of 2017. Praised as “full of life lessons and uplift” (PEOPLE), the collection of 12 songs all written by the young star includes Lauren’s first No. 1 smash, “Road Less Traveled,” the Top 25 hit “Doin’ Fine,” and the deeply personal and inspiring, “Three.” Following the album’s release, Lauren has received multiple nominations for the ACM Awards, CMA Awards, CMT Music Awards, Teen Choice Awards, Radio Disney Awards and Billboard Music Awards including taking home last year’s ACM New Female Vocalist of the Year Award and CMT Collaborative Video of the Year Award for “What Ifs,” the 4x Platinum-selling No. 1 hit with childhood friend, Kane Brown. Lauren is one of CMT’s Next Women of Country and she received her very first CMT Music Award for Breakthrough Video of the Year with her No. 1 hit “Road Less Traveled.”
The “sassy Southerner with killer pipes” (PARADE) has shared the stage with superstars including Alan Jackson, Blake Shelton, Carrie Underwood, Luke Bryan, Martina McBride and Jason Aldean, as well as headlining her own shows including her recent U.K. tour with sold-out shows in Manchester, Bristol and Glasgow. Lauren heads out in January on her own headlining That Girl Was Me Tour.

ABOUT BELLAMY BROTHERS
David and Howard Bellamy continue to prove the trail they’ve ridden to fame has been as unique as their music itself—music that is now celebrating more than 40 years of success. The road that started on the pop music charts in the ‘70’s, took a winding turn into country music in the ‘80’s, paving the way for duos to come, such as Brooks & Dunn, Montgomery Gentry, Big & Rich and The Judds. “If I Said You Had A Beautiful Body (Would You Hold It Against Me),” originally scrawled on a dinner napkin by David, rocketed them to the top of the country charts the way “Let Your Love Flow,” had done in the pop market just a few years earlier. It proved to be the first of a string of 14 No. 1 singles in the U.S. alone. They’re the only U.S. country music act who've toured in India, Sri Lanka, New Caledonia and Qatar. The Bellamy Brothers hold the record in both the Academy of Country Music (ACM) and the Country Music Association Awards (CMA) for the most duo nominations. Numerous Grammy nods have also been directed toward the brothers. The Bellamys are also opening up their lives to television audiences with their new reality show, “Honky Tonk Ranch.” Each episode of “Honky Tonk Ranch” captivates viewers by the unpredictable misadventures the Bellamys face while balancing their globe-trotting touring schedule while running their sprawling family ranch in south Florida. “Honky Tonk Ranch” is executive produced by David Bellamy and directed, shot and edited by Derrek Kupish, CEO/founder of dkupish productions. “Honky Tonk Ranch” airs Sundays at 8:30 p.m. ET / 7:30 p.m. CT on The Cowboy Channel.

ABOUT JOHN ANDERSON
The story of John Anderson is the true-to-life, yet larger-than-life, saga of one of the most dramatic career turn-arounds of the 1990's.  It's the story of just reward for a singer who originally took country music by storm and helped keep it true to its roots back in the early '80's.  His memorable hits from that musical era included “Wild and Blue,” “I'm Just An Old Chunk Of Coal,” “1959,” “I Just Came Home To Count The Memories,” “Black Sheep” and “Swingin'.” “Straight Tequila Night,” the lead-off single from 1992’s Seminole Wind went to number one across the board on every country chart, and spawned another run of hits in the decade to follow such as  “Money In The Bank,” “I’ve Got It Made,” “I Wish I Could Have Been There,” “Let Go Of The Stone,” “Bend It ‘Til It Breaks,” “Mississippi Moon” and “Somebody Slap Me.” John Anderson… an influence to many of today’s country artists, a colorful character and truly a country music treasure!

ABOUT TRACE ADKINS
Towering baritone Trace Adkins has sold more than 11 million albums and charted more than 20 singles in his 25 years in Nashville, a remarkable run for one of country music’s most easily identifiable stars. With over one billion spins on Pandora (10 million per month), one million followers on Spotify and nearly 200 million plays on YouTube, the Louisiana native is back in the studio after releasing his 12th studio album, Something’s Going On in 2017. A three-time GRAMMY Award nominee, Adkins has won three Academy of Country Music Awards, including the 2009 Single of the Year Award for “You’re Gonna Miss This” and Vocal Event of the Year with Blake Shelton for “Hillbilly Bone” in 2010. The Grand Ole Opry member is also an author and spokesman for the Wounded Warrior Project and The American Red Cross, for whom he raised more than $1.5 million dollars as winner of NBC’s All-Star Celebrity Apprentice. In recent years, Adkins has performed for our service members across 12 USO Tours. In his 2007 autobiography, A Personal Stand: Observations and Opinions from a Freethinking Roughneck, Adkins recounted his rise to fame, brushes with death, and battles with personal demons. Adkins has also acted in multiple films and television shows, playing a tough-as-nails biker in "The Lincoln Lawyer" (starring Matthew McConaughey), a desperate father in "Deepwater Horizon" (starring Mark Wahlberg) and a wise oracle of a tattoo artist in the family friendly film "Moms' Night Out" (starring Patricia Heaton, Sean Astin, Sarah Drew). His role as MercyMe’s real-life manager, Brickell, in the box office smash “I Can Only Imagine” was the third biggest selling movie on its opening weekend in America.